Tsung is a load testing tool written in erlang, it allow us to perform load testing for web applications, databases, etc. Or as its website says:

Tsung (formerly IDX-Tsunami) is a distributed load testing tool. It is protocol-independent and can currently be used to stress HTTP, WebDAV, SOAP, PostgreSQL, MySQL, AMQP, MQTT, LDAP and Jabber/XMPP servers.

More info is available in its web page http://tsung.erlang-projects.org/user_manual/

In this post we'll cover how to test a web application and at the time of writing this the available version of tsung is 1.7.0.

DISCLAIMER: All the steps described here are for macOS, there shouldn't be many differences for a linux system.

In order to generate charts correctly we need to install a required dependency, we have to execute cpan template and we're almost ready to go

We're going to use this example project for our tests. We can follow the instructions described in its README.md file.

This project have the following urls:

We're going to write test for each of this routes.

Tsung load tests are defined in xml, in these xml files we can define the behaviour of the test, how many clients we want to execute, define the the endpoints to be used and so on.

tsung comes with some examples included, in macOS we can find them in /usr/share/doc/tsung/examples and use them as a base for creating new tests.

This a simplified version of the example http_simple.xml example included in the installation folder, let's create a file called demo.xml and put this content on it:

Note that the second line is pointed to a path inside the tsung installation folder, this can be changed, the tsung-1.0.dtd is available in its web page http://tsung.erlang-projects.org/user_manual/dtd.html.

Let's explain a little bit about the test sections:

This is the server who will be serving the incoming requests from tsung, in this case is the same machine and listening at port 4000 using a TCP connection, in a proper test it should a separate machine.

We can define how the test load will behave, in this case we're configuring tsung to have 2 phases:

For more info about the load configuration we can check http://tsung.erlang-projects.org/user_manual/conf-load.html

Now we can define what endpoints we're going to test, we can define the url, method used and some other properties that can be found in http://tsung.erlang-projects.org/user_manual/conf-sessions.html#http.

In this case we're defining the 4 routes from our example project:

Note that in the case of the POST request we're defining a contents_from_file property, this allow us to load the body of the request from an external file, we can define it in the same test but it's easier to have a separate file, the content of the payload.json if the following:

This file needs to be in the same folder as demo.xml

Now we have all the pieces on place so we can execute our tests, we should be in the folder where we create our demo.xml and run the following command:

For each execution tsung create a folder under ~/.tsung/log/ where all the data generated by the tests will be saved, tsung also has a embedded web server where we can see the results of the tests, by default it will run on http://localhost:8091/

We can see live reporting in the service running at http://localhost:8091/ or we can see more detailed data using the tsung_stats.pl script.

We can see the status of the running tests: 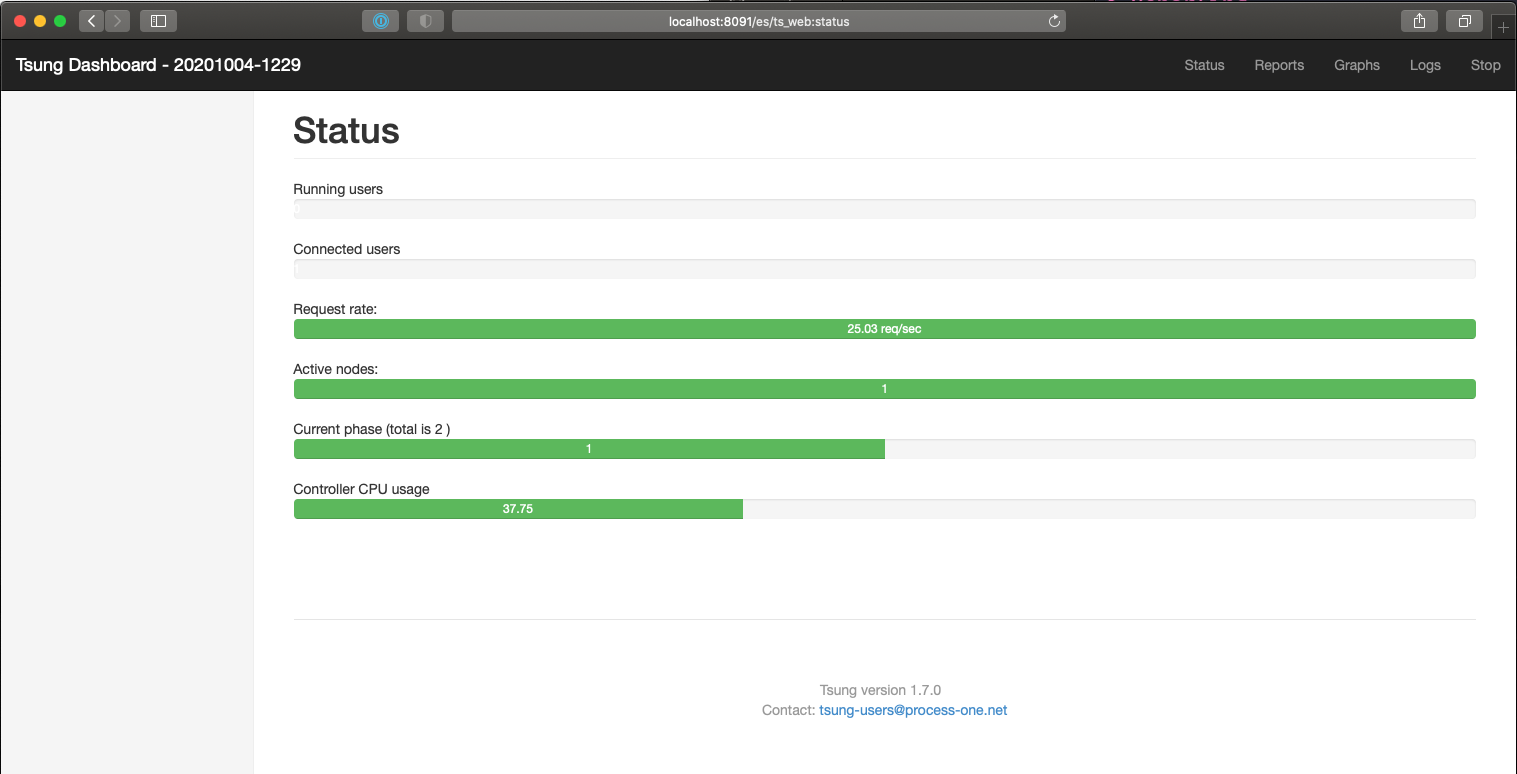 We can see stats about the connection time, response times, OS resources usage and so on.

This could be the most interesting one, we can see pretty good charts about the behave of the service that we're testing, it has the following sections: 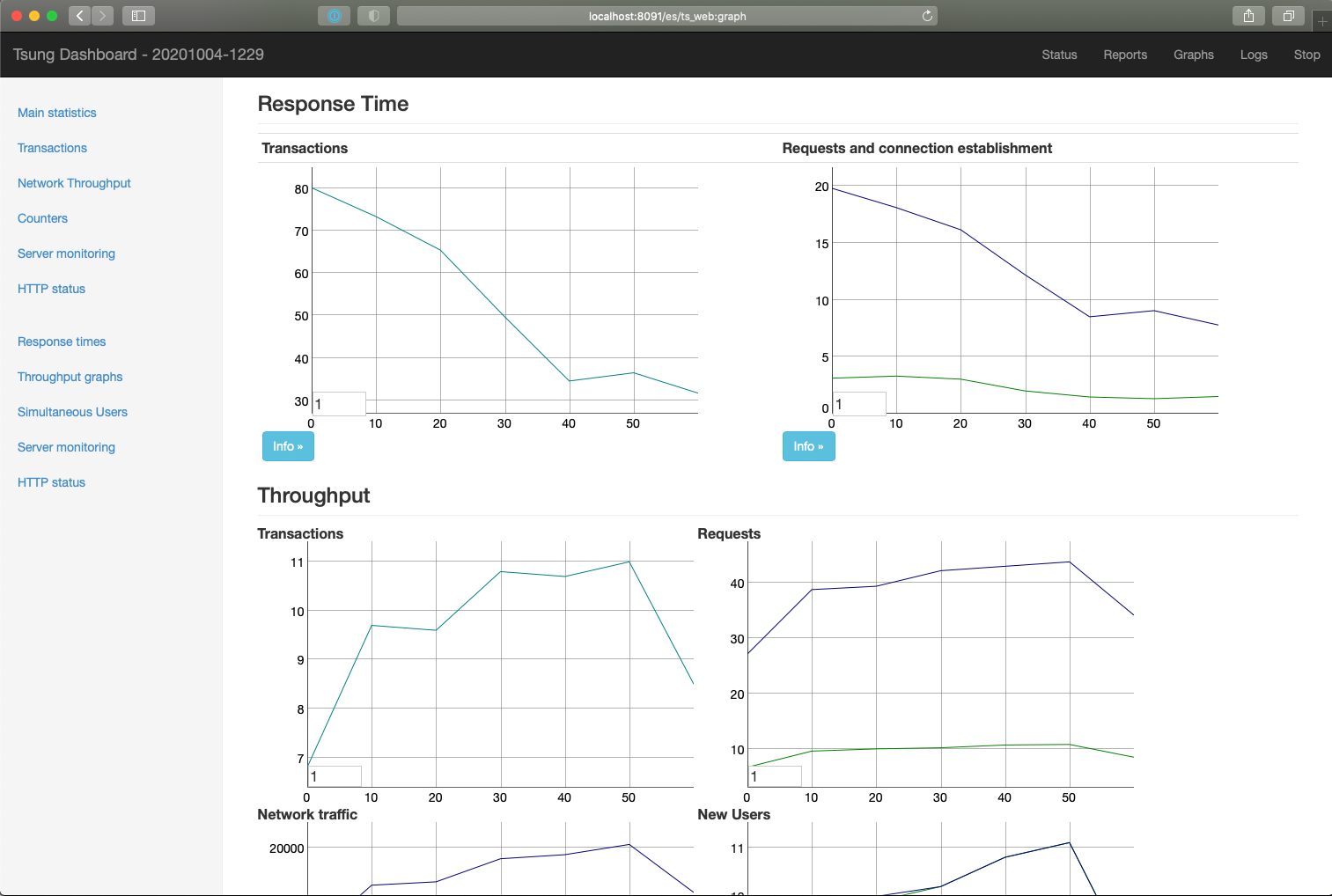 Once we finish the tests we can go into the log folder, ~.tsung/log/20201004-1229 in this case, and generate more detailed charts, see CSVs with all the resulted data and more.

This will generate a few new folders inside of it:

For example in this chart we can see the numbers of users vs the time, and as we can see the quantity was increased after 10 minutes, just like we defined in the config file. 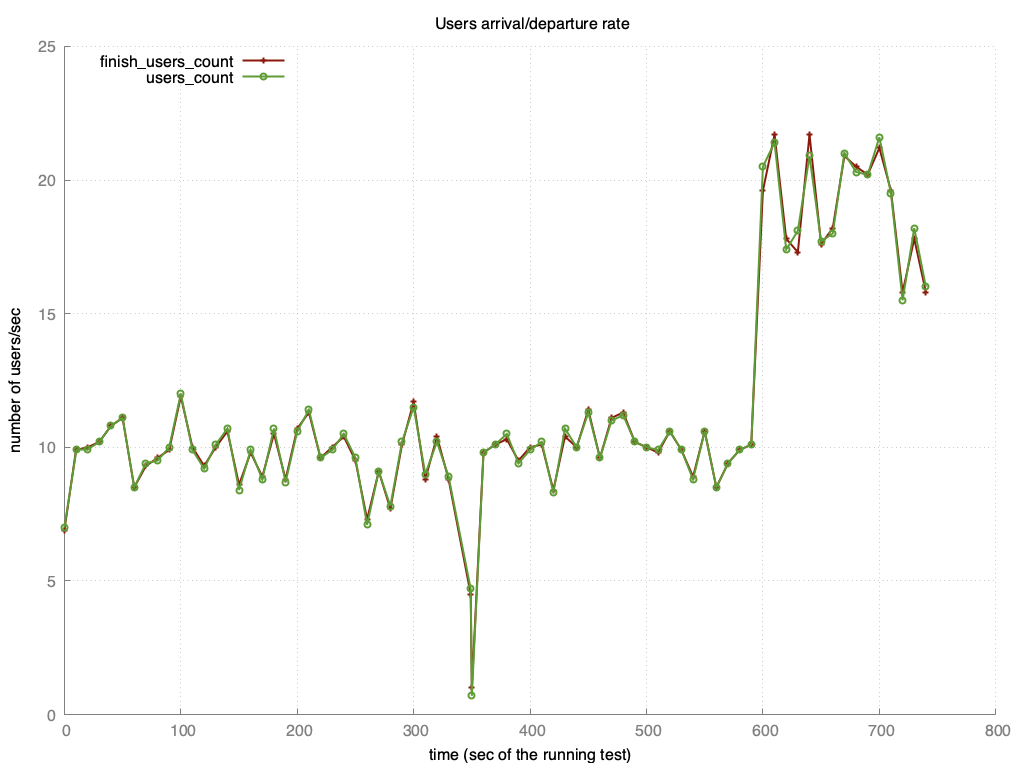 tsung can be used to test not only http services, it supports sql databases, websocket protocol and many more protocols, so we can use it to perform load test for many parts of our application and because it is based on plain texts configuration files we can version them to keep track of the tests we perform along the time.